Who is Nine-month-old Lottie Brown [Cilley?], Daughter of Olive, Probably From Maine? 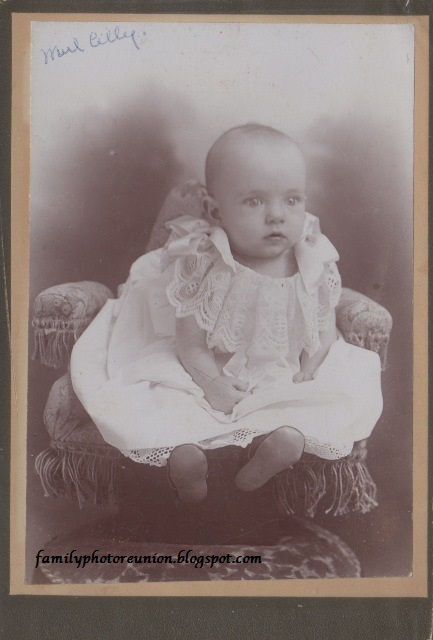 This little cutie has given me a very hard time.  I can't seem to figure out who she is. This baby portrait was found with another baby photo from around the same time period with the same notation on the front of the card that reads, "Merl Cilley."

There isn't a photographer's imprint on the front of the card, but on the reverse we are given several clues.
First, the child is identified:
"Lottie Brown, Age 9 months 2 weeks.  Died Dec. 26, 1915"
"Aunt Olive's Children also other picture."

And finally there is, what I believe to be a photographer's rubber stamp on the back.  It simply says, "True, Clinton, ME.

I located Samuel M. True, a photographer, who worked out of Clinton from 1900 to at least 1912.  He could have been in business earlier than 1900, but I was unable to find him in the 1880 census, nor is he in the 1920 Census in Kennebec County.  However, I did locate his wife Carrie and their children in the 1920 census and she is listed as a widow.

As for Lottie Brown, we know that her mother's first name is Olive.  I could not find any Lottie or Charlotte Browns in the censuses with a mother named Olive.  I went further afield, and found several possibilities, none seemingly more likely than any other.

The one clue that could help us pinpoint which Lottie Brown is correct is, of course, the death date provided on the back of the image.  If we can locate a death record for Lottie Brown who died 26 Dec. 1915, her parentage and/or birth date may be noted as well.  Unfortunately, the image of the other child has no inscription other than the same photographer's stamp.  Merl Cilley, the name that appears on both photos may be the recipient and is likely related.  One could have a look at his ancestry, but that's a rather time-consuming approach.

How would you proceed?

Posted by TheArchivist at 10:05 AM

Email ThisBlogThis!Share to TwitterShare to FacebookShare to Pinterest
Labels: Brown, Cilley, Clinton ME