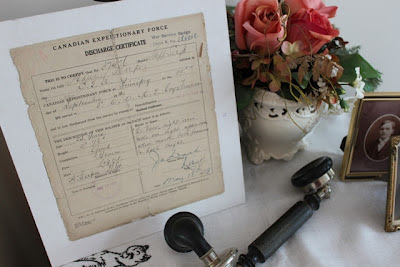 This World War 1 Discharge Certificate was found in a Victoria Antique Shop specializing in Military items.  Someone mounted the paper onto cardboard, probably for display purposes.

I located Hanby Harper's Attestation Papers on the Library and Archives Canada website. The attestation papers (see link above) show that Hanby was born in Otley, Yorkshire, England on the 12 February 1896 and that he enlisted at the age of 18 years and 6 months.  Hanby was employed as a painter and was not married at the time of his enlistment in September of 1914.  His next-of-kin is Fredrick Harper, who lived at 583 Bannerman Avenue in Winnipeg.

Fredrick Harper was Hanby's father, and his mother's name was Florence Wardman1.  The family lived in Otley at the time of the 1901 UK census.

In 1911 Hanby was living at the home of his grandparents, John and Christina Wardman in Birkenhead, Cheshire2.  I don't know when Hanby and his parents came to Canada.  I was unable to find them in the immigration records that I have access to online.

In 1932, Hanby is living at 569 Bannerman Avenue in Winnipeg; Mrs. Fred Harper, just a few doors down at 577 Bannerman3.  I haven't yet discovered what happened to him after that.  If you have information to share, I'd love to hear from you.

UPDATE  Aug 3, 2012:  How this document ended up in an antique store, we haven't quite figured out yet, but I am happy to report that this certificate has been reunited with Hanby Harper's granddaughter in Ontario.

Posted by TheArchivist at 3:30 AM