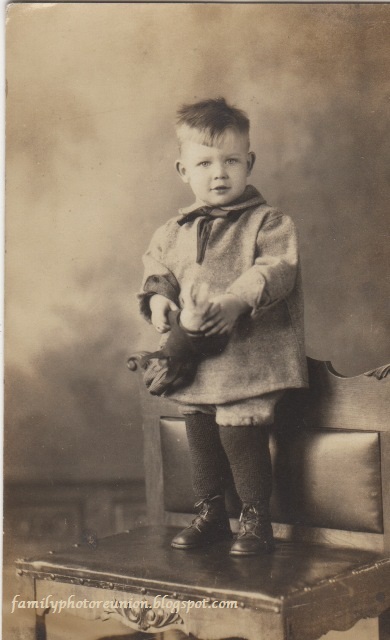 I haven't posted a postcard portrait here on FPR for a while.   I've been avoiding this one because, in my preliminary research, I had issues with the surname.  On the reverse is the following note, written by May "MacHerracher."  At least that's how I read her handwriting.  When an author writes their own surname, I'm inclined to go with their spelling as they, of all people, would know the correct one. 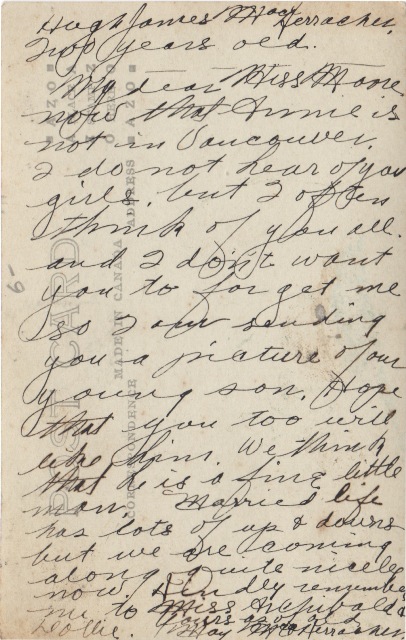 So this one befuddled me, because May appears to spell her last name with MAC.  But I even had an issue with the K.  It looked to me like she was spelling MacHerracher, which is a fairly uncommon variant of McKerracher.  I searched for any MacHerrachers in Ancestry.ca and came up with a sum total of two hits.  I tried McHerracher.  Four hits.  Anywhere.  The Library and Archives Canada Genealogy site came up with zero for both MacHerracher and McHerracher.

So I went with my instinct.  In my paper notes I had been "misspelling" the name I saw on the postcard consistently as McKerracher.   I conceded that perhaps I was reading May's 'K' as an 'H' erroneously.  Her handwriting is quite swirly.   I clearly see "Mac," though.  I tried the search as MacKerracher (again, nothing great showed up).  However, when I tried McKerracher, I found one possibility.

My first hit was on the www.canadaatwar.ca website.   Hugh James McKerracher, a sergeant with Royal Winnipeg Rifles died July 5, 1944 and is buried at Beny-sur-mer Canadian War Cemetery in Normandy.  He probably died at the Battle for Caen.

According to  the Manitoba Marriage Index (Reg# 1919, 033167) Elisabeth May Kennedy married Lester Hugh James McKerracher in Winnipeg, Manitoba on the 18th of June 1919.  As we are just out of reach of available birth records because of the 100-year-old rule, I couldn't find Hugh James McKerracher's birth online at the Manitoba Vital Records site.  Nor are there any censuses available that cover this time period in Canada.

So is this the correct Hugh James McKerracher?  Did this young boy die as a young man on the battlefield in France in 1944?  It is a possibility, but with all of this name confusion we can't be sure.   I also don't know what May's connection might have been with Vancouver.  It sounds as if she may have lived there at one time.   We're open to theories, folks.  Let me know if you have a lead, clue or hunch that we might follow.
Posted by TheArchivist at 3:30 AM