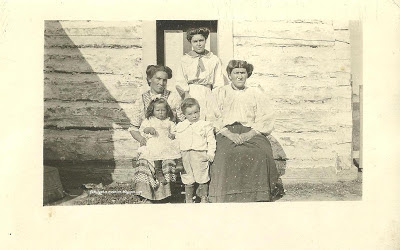 I've encountered a spate of difficult photos of late.  Here's another for anyone who loves a challenge.  The reverse of this postcard photograph, found in a Nanaimo, BC antique shop, reads: 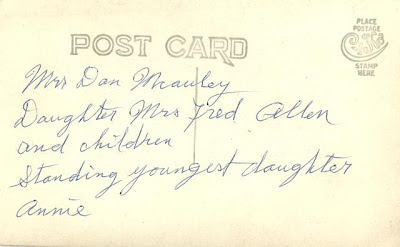 The challenge here is that the two married women are identified by their husband's names.  The youngest daughter Annie is, presumably, Annie Mcauley.  So I started my search looking for a Dan Mcauley who had a daughter, Annie.  I found one exact match after an Ancestry search, a Dan Mcauley in the 1891 Scotland Census living in Barrhead, Barrhead and Levern, Renfrewshire with a daughter Annie.   I found another possibility on Ancestry.com and a few others that might fit.

My next thought was to try and find a Fred Allan who married a Mcauley.   I didn't find anything on Ancestry.  I headed over to Familysearch.org.  Nothing.

The house in the image looks like a first homestead of the type you would find on the prairies.  It was taken after 1907.  While the image was found in British Columbia, that doesn't necessarily mean it was taken in Canada.  It could very well have been, but my experience is that the photos I find are pretty well evenly split between Canadian and American images.

Another image to remain a mystery?

UPDATE November 21, 2012:  This once-a-mystery postcard is on its way to Alberta to be reunited with a descendant of Mrs. Dan McCauley, who has been identified in the comments section as Mary Norn McCauley.  The two other women are Mary McCauley Allen and Annie McCauley.
Posted by TheArchivist at 3:30 AM