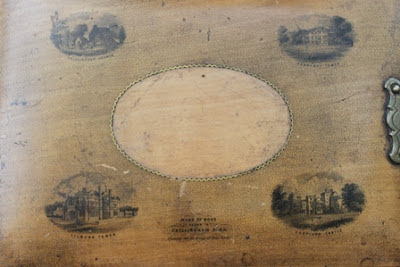 This is the cover of the lovely souvenir carte de visite album that my husband bought for me when he was in Calgary last month. I've seen all kinds of fabric and paper coverings on cdv albums, but this is the first one I've seen in wood. And not just any wood. This album touts the fact it was made from "wood grown in Chillingham Park."  Chillingham Park, located in Northumberland, is "famous for its breed of wild cattle."

There are four images on the front cover:  Chillingham Church, Fowberry Tower, Lilburn Tower, and Coupland Castle. The back features an image of Chillingham Castle.  A small plaque appears to be missing from the centre. The album was probably produced in some quantity.  A photograph of another manor house was cut out in an oval shape and pasted on one of the inside pages. I haven't been able to identify it.


Of the 64 carte de visites in the album, only two are identified by subject's name. There is also a loose cdv of "Royal Group, Drumlanrig Castle, October 1869," which identifies 13 prominent individuals, including Prince Christian, Princess Christian, Lady Constance Marsham, The Earl of Dalkeith, and other guests invited to the castle by The Duke of Buccleuch during the first week of October 1869. The album may have belonged to someone with connections to the upper class. The cdvs in the album feature well-to-do individuals. The clothes are elegant. Some of images are taken at high-end studios such as Elliot & Fry (London), Alexander Bassano (London), Camille Silvy (London), and O. G. Rejlander (London). Some of the photographs originated in Glasgow.

The image of "Miss Austin," a girl who looks to be about thirteen or fourteen years old, was taken at the Elliott & Fry Studio in London, circa 1870s. It is too much of long shot to tackle a search on her right now.  The other identified image is of a child, "Arthur William James Cecil, 15 weeks old" and his parents. The photographer's imprint on the reverse reads, "The Misses Carrick, 14 Grey Street, Newcastle on Tyne." I believe the women operated their studio in the 1870s.


The interesting thing about this young boy's identification is that all four names provided could be forenames. "Cecil" could be a surname. I searched on Ancestry.com for the full name with Cecil as the surname. I had several exact hits, all for the same individual and many, many others if counting anyone with one or more of the forenames and a last name "Cecil," or any combination of abbreviations.

There were quite a few leads to follow when I looked into the exact hits for "Arthur William James Cecil." Of particular help was the Cambridge Alumni Directory, 1261-1900 on Ancestry.com which stated that Arthur was the son of Lord Arthur Cecil, and was born Apr. 4, 1875 at Newbiggin, Westmorland. Arthur William Cecil was the Aide-De-Camp to the Governor of Victoria, Australia, 1898-1900 and later served with the Grenadier Guards in the South African War and in WW1. He died Sept. 26, 1936 at Rudgwick, Horsham, Sussex. He was connected to several residences including Finchcox Park, Goudhurst, Kent; and Orchardmains, Tonbridge, Kent.

I tried to find a good portrait of Lord Cecil for comparison with the father in the above photo.  There are surprisingly few images online of his family. Here's a link to the best portrait I could find of Lord Cecil from Bailey's Magazine. 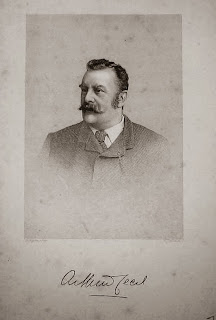 He does bear a good resemblance, I think.  If my image is actually Lord Cecil, then there is a wealth of information about his family, starting with Burke's Peerage.  Lord Arthur married Elizabeth Ann Wilson, whose lineage is as meticulously documented as Lord Arthur's. Even so, I didn't have any luck finding an online image of her.

At this point, I can't say who owned the album or even who is featured in the album.  But I'm generally tenacious about these things, and will keep trying to uncover clues as to its origins.  In the meantime, if you can help with identifying either the manor house or the trio in the above photograph, I'd be very happy if you'd leave a comment.


UPDATE: Our manor mystery has been solved! Read about the discovery here!

Posted by TheArchivist at 10:49 AM