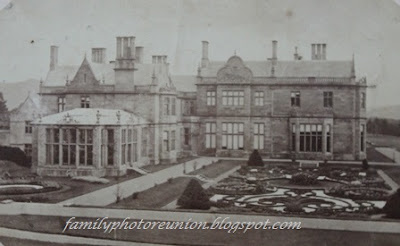 I invite you to read about the acquisition in my original blog post, Mystery Manor House Carte de Visite Album.

In 2013 I speculated the Manor House might have been located in Northumberland. I learned recently that it is actually located in Scotland! Trish, a skilled researcher on the British genealogy forum Rootschat.com, identified the mansion for me. She and other Rootschat members posted links to current images. Poltalloch Mansion was built in 1849, near Kilmartin, Argyll & Dumbartonshire, Scotland about six miles north-west of Lochgilphead. The two-storey Jacobean mansion was built by Neil Malcolm the 13th Laird of Poltalloch, at a cost of £100,0001. It is now a ruin. Below are some links to recent images of Poltalloch Mansion:

Since 2013, 9 of the 65 photographs in the album have been identified:


A few of the other images are tentatively named, but I'm not quite satisfied that I've identified them without a doubt, so I will continue to look for other images to confirm those portraits. In future posts, I will feature the above-mentioned images with detailed descriptions about how the photographs were identified.

I do not doubt that Poltalloch Mansion was a significant location for the original compiler of this cdv album. Now that the mansion has been identified, I plan to work on finding the connection between the place and the owner of the album. Research into Poltalloch Castle may help identify other images in the album.

Posted by TheArchivist at 5:40 PM