I'm always curious how family photos end up in a local antique shop, especially ones from faraway places.  Today's grouping of photos, are, as far as I know, unrelated to each other and have only two things in common:  Denmark, and the fact they were found in antique shops on Vancouver Island, BC.

The first is a postcard photograph of a family from the island of Bornholm, Denmark. 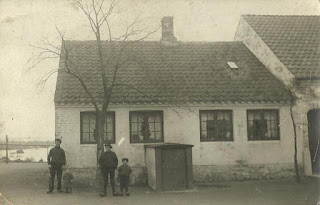 It's difficult to tell, but I would guess the the family consists of two children (one boy, and probably a little girl), an older boy and a father.  This postcard was never sent through the post, though it may have been placed inside an envelope and mailed.  The inscription reads, "En Glædelig Jul og et godt Nytaar ønskes af Familien Hjorth, Aarsdale."  The family Hjorth is wishing the recipient of the photo a Merry Christmas and a Happy New Year.  Aarsdale is a small fishing village located on the eastern part of Bornholm with a population today of less than 500 people.

I think it would be safe to say the image was taken somewhere between 1907-1930, with the middle of that time frame being most likely.   That's quite the spread, I know, but I don't believe I can narrow it down much further without first identifying this Hjorth family and using their vital statistics to date the photograph.  In 1907, the Kodak company was the first to offer a service called "real photos" that allowed the general public to make postcards out of any photograph. I plan to do some more research into dating postcard photographs.  Aren't the wooden shoes wonderful?

See my follow-up post about the Hjorth Family Portrait.

The carte de visite photo of two children (below) was also taken in Denmark.  Again, the gender of the children is difficult to tell.  In the old days very young boys were sometimes outfitted in dresses.  The photographer was A. Munch, of Horsens.  The photo is inscribed on the back to Fru Ginnerup of Tugthusby
31, Horsens.  I believe the surname of the children is Jørgensen.  The photo was probably taken in  the 1890s or even early 1900s judging by the side of the photographer's imprint and the thickness of the carte de visite stock.  Children's attire is difficult to date at times, but the styles seem to fall within that time frame.  One interesting thing to note is Fru Ginnerup's address.  A "tugthus" is Danish for prison.  It would seem that she lived in an area close to the Horsens Jail.  I found an interesting article (in Danish) about the history of Horsens Statsfaengsel.    While it doesn't implicitly say, it sounds as if only men were housed there, so I am not sure if Fru Ginnerup had a connection to the place or merely lived in the vicinity. 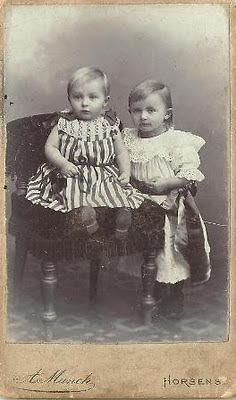 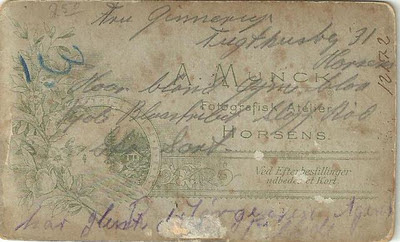 The third item from today's set of Denmark-related photographs is a postcard image of Mr. & Mrs. A. Paulsen of Milnor, North Dakota, taken sometime after 1907 (see below).  This photograph hasn't been postmarked, and so was either delivered by hand, or sent through the mail in an envelope.  It was addressed to a Danish-speaker as the text on the back is a Christmas greeting in Danish.  I couldn't find a viable match to A. Paulsen of Milnor, North Dakota on the US censuses at Ancestry.com, but I still can widen my search to include other parts of North Dakota, with spelling variations.  I'll be sure to provide an update, should I learn any more about the Paulsens or any of the people I've highlighted here. 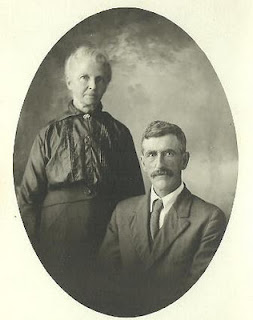 Posted by TheArchivist at 5:12 PM