Handwriting is everything when there is very little to identify a photograph.  This cabinet card is one of those frustrating instances where everything should fall into place, but doesn't because you're unable to decipher, with certainty, the surname of the subject. When I first investigated this photograph a few years ago I gave up on it, thinking it might be a hopeless case. Upon revisiting this mystery it turns out that the difficult-to-read signature may be just the clue needed to figure out who this gentleman is. 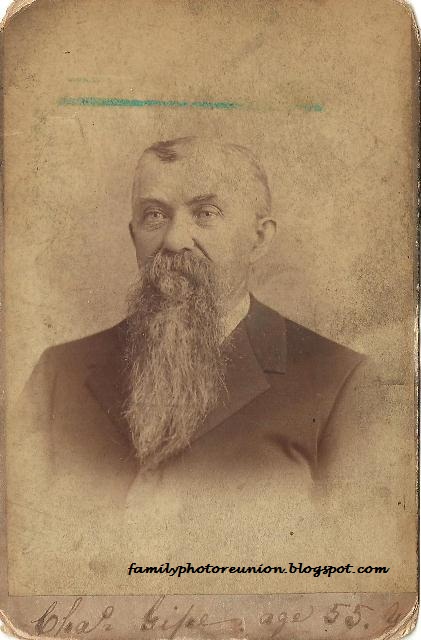 Initially, I thought the man's surname was "Gifoe."  But, after plunking "Gifoe" into Ancestry and coming up with only one (and highly suspect) hit on the surname Gifoe, I abandoned that idea, at least temporarily.  If not "Gifoe," what could it be?  Next I tried "Gifre" which provided a few hits, with one single Charles Gifre (d. Kentucky at age 87 in 1918) which I now suspect was a transcription error--but more on that later. Before I could begin to look further into this possibility, I needed to consider the photographer.

The reverse of the cabinet card does provide us with a photographer's name:  Jas. Whited, Cosmopolitan Studio. A location isn't given. A search of various photographer's indexes didn't yield any photographers by the name of James Whited, but I did find a conversation on a genealogy board that suggested Jas. Whited operated a studio in Bowling Green, Kentucky. However, I couldn't find anything online that indicated this was accurate.

Perhaps a reader has crossed paths with the Jas. Whited Cosmopolitan Studio in their research. If so, I'd be so happy to hear from you. It's usually at this point in a fruitless search that I put the photo aside for another day but after staring at the signature for a long time I decided that the surname might be "Gipe." While I am not able to say definitively if this is Charles Gipe, I will say that I found a signature on a marriage bond for the marriage of Chas. A. Gipe and Louisa Hilbert in Nelson, Kentucky that looks very much like the signature on the cabinet card above1.

Charles A. Gipe was a shoemaker, born in Bavaria around 18312. After immigrating to America, he settled in Nelson County, Kentucky3 and later moved to Louisville4 where he died in 19185. In the Ancestry transcription of this record, Charles' surname is recorded as "Gifre," which is an understandable mistake--understandable because I made the same call myself early on in this investigation. If the information on the cabinet card is correct, the image of Charles Gipe would have been taken in 1886.

What do you think? Could this be Charles A. Gipe?