Comparing Notes: Is this Jessie Bucke and Daughters, London, Ontario? 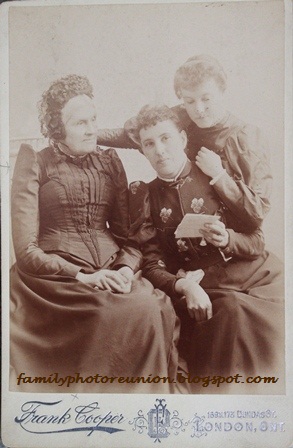 This started out as a "What a Shame" post, since the photograph isn't properly identified but perhaps there is hope we can discover who the three women are.  There is a photographer's imprint:  Frank Cooper, 169 & 173 Dundas Street, London, Ont."  And, it does have an inscription on the back that looks like "L. Brooch," "2 Brooch" or "L. Burch."

I didn't have much luck finding a suitable match in the Canada Census for "Brooch."  I then moved on to the photographer and found a wonderful collection of Frank Cooper portraits on the London Public Library Image Gallery.

I was hoping to find an identified copy of this image on the site, but sadly, I did not.  I found two interesting portraits, though, the subjects of which have similarities to the older woman in my photograph.  What do you think?  Are these the same woman?


Then there is this portrait by the Edy Brothers in London, Ontario (below), on which the London Public Library archivist has asked the question "Is the couple Dr. Richard Maurice Bucke and his wife Jessie Bucke?"  Richard Maurice Bucke was a noted psychiatrist and close friend of Walt Whitman.  He died in 1902.


What do you think?  Are either of these images the same person as in my "Mystery Brooch" portrait?  Or is it just a matter of similar headwear and clothing?
Posted by TheArchivist at 4:00 AM