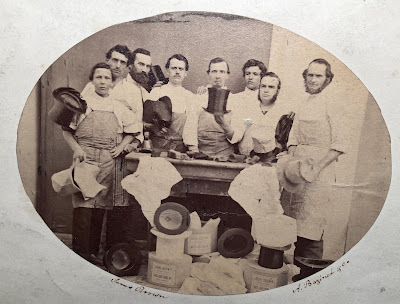 Marilyn, a writer friend of mine from Ontario, sent me this occupational photograph of a group of men clearly involved in the hat trade to see if I could learn anything more about it. I retrieved my magnifying glass and had a close-up look at the hat boxes in the photograph. I was able to read most of the details typed on the label of the hat box visible at the bottom left of the photo:

There are two names under the photograph on the cardstock, which I believe relate to the photographer: James Brown [from] A. Bazinet & Co. The image itself appears to be a group of hatters/furriers from the John Brown Hat Company.

The Bibliothèque Et Archives Nationales Du Quèbec (BANQ) has placed digitized Montreal city directories online which show Antoine Bazinet was a furrier and hatter in Montreal from 1843 to about 1864. He may have been in business earlier, but the directories begin in 1843. In 1865 Bazinet is listed as a “photographic artist” and stays in this profession until 1870 when he appears to work as a toll collector.1  The Dictionaire des Artistes de Langue Francaise en Amerique du Nord by David Karel pinpoints Bazinet’s photographic years between 1863 and 1870. His studio was located on the corner of Rue St. Vincent & Notre Dame.


John Brown, a native of Greenock, Scotland, first appears in the Lovell Montreal Directories in 1843.2  His business could be found on Nazareth near Wellington Street in 1843 and by the 1850s was located at 229 St. Paul Street. I wouldn't be a bit surprised to learn that Antoine Bazinet & John Brown shared a prior working history. James Brown, the photographer who worked for Bazinet, may have been related to John Brown. John Brown did have a son named James, born around 1846 but I could not isolate our James in the directories or the available censuses.3

It looks as if John Brown's hat business was booming with the number of staff shown in the photograph. In 1861 John lived in a 1-storey stone house with his wife, Elizabeth & their ten children. He employed a seamstress, coachman, chambermaid, and cook. There were also three additional residents, all clerks, who may have been employed by Brown. The businessman also owned a horse, a cow, two carriages, and had $24,000 invested in his real and personal estate.This image likely dates to the late 1860s. John Brown passed away in Montreal, on the 10 November 1874, aged 59 years.