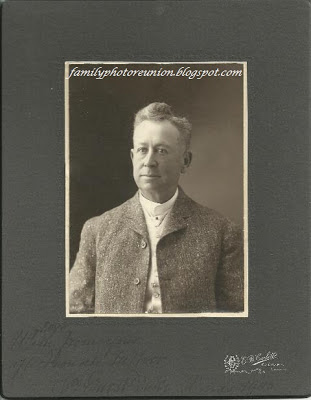 George Ernest Duke has signed his portrait, "With Love, From Your Affectionate Father, Geo. Ernest Duke, Xmas 1905."  The image was taken by E. B. Curlette, a prominent Calgary photographer who operated in the city from 1899 through to the 1940s.

In 1901, there was a George Ernest Duke, Tobacco Merchant, living in Calgary with his wife Myrtle1; He was born May 21, 1858 in England and immigrated to Canada with his wife around 1895.  In 1911, George and Myrtle lived at 511 - 4th Avenue West, Calgary2.  No children resided with the couple.  While the birth dates are all wildly different in the 1901, 1906 and 1911 censuses, I think these are the same couple throughout.  George is listed as either a tobacconist, or tobacco merchant.  The immigration years are fairly consistent, with the exception of one census.  More research would have to be done to tie the George Ernest Duke in the Canadian censuses to the following family.

In 1881, there is a George and "Myrtilla" Duke, and daughter Zoi [Zoe?] M. H. Duke, three years old, who lived in West Dean, Sussex, England3.  Zoe was the second child born to the couple; their first was George Lewis Duke, born 18 Feb 1876 near Chichester, West Dean4.   Another Duke child, named Edwin Ernest, was born in 25 Sep 1881, also near Chichester5.  It is possible that George Lewis died in infancy, since he does not appear in any of the censuses with his parents.

I was unable to find the family's immigration records to Canada online, but the search was neither exhaustive nor thorough and I am optimistic that one could be found.  I searched for Zoe on Google and I lucked out.  Archives Canada has a brief biography online about Zoe, which you can read here.  It gives her immigration year as 1896, which are in the same ballpark as the Dukes I found in the Calgary censuses.  Zoe was a painter and the Glenbow Archives in Calgary has collected her papers and work.  She married Sidney J. L. Dunning, a member of the Northwest Mounted Police in 1898 which may explain why she was not in the household of her parents in the 1901 Canadian census.

An obituary for George E. Duke appears in the August 31, 1925 issue of the Calgary Daily Herald.  While it sounds as if George has always lived with his daughter in Calgary, the censuses say something else.  I've looked at the 1901, 1906 and 1911 censuses for Zoe M. H. Dunning and George E. is not living with her in any of them.  She was living in Saskatchewan for all three.  As the Archives Canada biography states, she moved back to Calgary in 1918, around the time of her mother's death the same year.

If we have the correct George Ernest Duke, this photograph would have been a Christmas gift to Zoe from her father.  I think the chances are good that I'm on the right track with my findings, but as always, we would require more research and a second photograph of George Ernest Duke to compare with ours to be certain.  If you have a photo of the Mr. Duke described in this blog, I'd love to hear from you.

Posted by TheArchivist at 3:00 AM