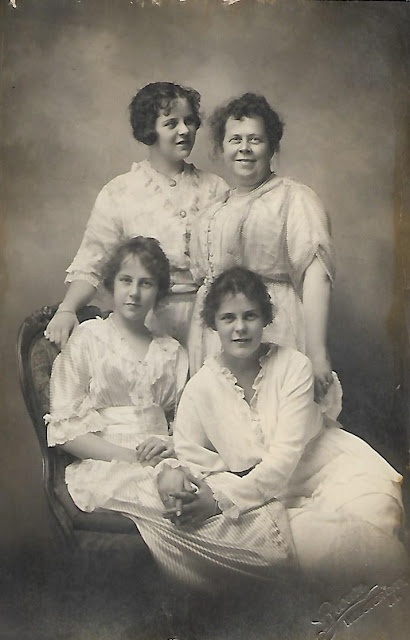 I wasn't sure that this Real Postcard Photograph was identifiable when I found it at a Victoria BC Antique Shop last month. I knew it would be a challenge. The photographer's name is provided on the front:  Brown, Webster City, Iowa.


"Mother's best
girlfriend
Jeannette Bale (Meade)
+
her sisters
+ Ma Bale -
who seems to have
been a remarkable
woman. She said -
"never let lack of
the right clothes
keep you from going
where you want to go."
Mr. Bale was called "Gum Daddy"
because (a pharmacist) he gave gum
to the kids."

I liked Ma Bale immediately from her image and even more so after I read her fashion philosophy. 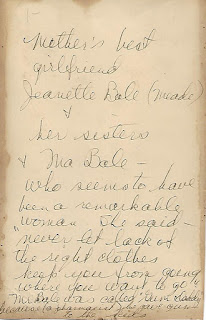 I never assume the photographer's location to be the exact location of the subject's residence, even though there's always a chance the photo was taken in the subject's hometown. Sometimes, though, photographs are taken on holidays, while visiting other family members or while in a neighbouring town. In this case, I found a three-year old Jeanette M. Bale living in Webster City with her parents William S. and Flora G. Bale. Two sisters, close in age to Jeanette are also in the household: five-year-old Louise, and the two-year-old Mary. William's profession is listed as "Salesman: Drugs."

I could not find the family in the 1910 US Federal Census. However, they do appear on the 1911 Canada Census, having moved to Winnipeg, Manitoba in 19062. William's occupation is listed as "Salesman." The mother in the house is now recorded as "Florence." In the 1916 Manitoba-Alberta-Saskatchewan Census, his occupation is also "Salesman -- Advertising Specialist3." We seem to be getting further and further away from Pharmacist.

But, the family moves back to the US and can be found on the 1920 US Federal Census, living in Galena, IL, in the household of Mary Gratiot, presumably Florence's mother (although the way the census is recorded, she could be William's mother). This time, William's occupation is "Druggist.4" While that's good enough of a match for me, I do want to confirm that Jeanette married a Meade, just to be sure I'm not forcing the puzzle pieces.

Turns out that Jeanette didn't marry someone with the surname Meade, but rather, someone with the given name Meade. I'm sure that must count. Jeanette Bale and Meade M. Morris were married in Galena, Illinois in 19215. Can you guess which sister is which? When do you suppose the image was taken?