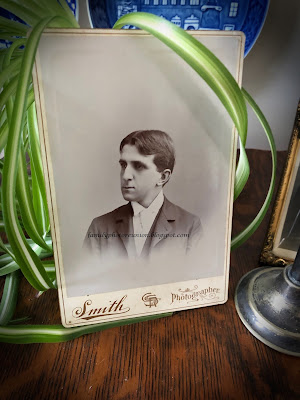 This photograph, labelled "Frank D. Fenderson" on the reverse, was found at a local antique store a few years ago. I've been meaning to look into the history of Mr. Fenderson for some time now, but put the photo aside because the cabinet card did not include a location. And, with a photographer named "Smith," I thought it would be a much more time-consuming endeavour to come up with a location since the back of the photo is blank, except for Mr. Fenderson's name.

I am fairly confident this is an image of Frank Devereaux Fenderson, a resident of Parsonsfield, Maine, who was a member of the 1st graduating class of the University of Maine Law School in 1899. This image may date to his graduation year. Fenderson was a member of the Sons of the American Revolution, which means there is a wealth of information out there about his lineage. He later became Judge of Probate for the York County Maine Probate Court. Frank Fenderson died 10 January 1949 in Cornish, Maine at 70 years of age.

Lily in the Loft by Carol MacKay (ISBN 9781927756911) is available on Amazon. "This is a book that young readers will enjoy for its historical elements, lovely illustrations, and relatable childhood story" – Rated “E” for excellent. - Resource Links, October 2017.