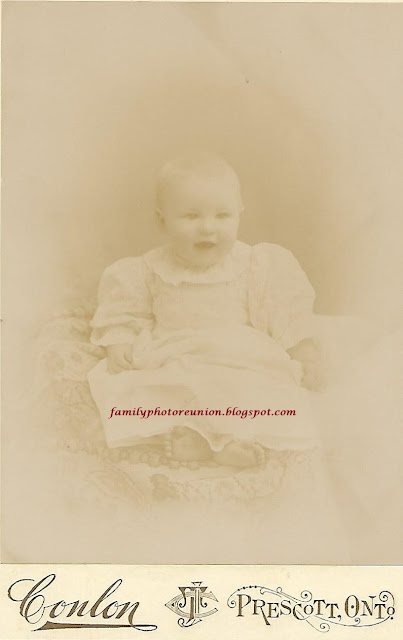 The image of this toddler has faded, but perhaps we can learn more about this happy lad to sharpen the picture a wee bit. We are lucky that the photograph is identified on the back. Note how the ornate photographer's imprint forced the inscription to be written along the very edge. J. T. Conlon of King Street in Prescott, Ontario operated his studio from 1890 to 1900.

The inscription on the back reads, "Bruce Gregg Jemmett - 6 months old March 5/93" 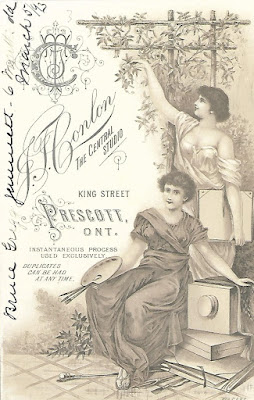 So what does this date pertain to? Bruce's birth date or the date the photograph was taken? I could only find one Bruce Gregg Jemmett in all of the records I searched on Ancestry, Familysearch, MyHeritage and Library and Archives Canada. They all provided the same birth date: 5 September 1892. If we add six months to the birth date we end up with a date of 5 March 1893. It's important to keep in mind that a date on a baby picture isn't always a birth date. In this case, the photo was likely taken to commemorate a six-month milestone.

Bruce Jemmett was the son of Frances S. and Rebecca (Mill) Jemmett. The family lived in Prescott, Ontario. His father was a banker and Bruce would follow in his father's footsteps. In 1911, Bruce was living in his grandmother Margaret Mill's home in Napanee on Donald Street, along with his mother Rebecca, after the death his father six years earlier. At this time he was employed as a ledger keeper. Bruce would later volunteer for service in WW1. I couldn't find much about his service due to the type of genealogy subscription I have, but he received an Imperial War Service Gratuity in 1920 for work with the Royal Navy. It appears he met his wife, Edith Millicent Reid, in England and they were married there in 1917. He was a Lieutenant Commander in the Royal Canadian Navy on the HMCS Whitethroat, a mine-layer, in the final years of World War II.

Posted by TheArchivist at 1:15 PM