Taking a Look at Two Tintypes

I absolutely love finding tintypes on my photo-hunting trips.  Substantial and sturdy, tintypes aren't easily damaged and can offer moments in time that might have been lost if the image was recorded on paper.

The first tintype was patented in 1856 by Hamilton Smith, and was very popular during the civil war.  It didn't catch on in Europe the way it did in America, so most of the tintypes you will find are of US-origin.   Tintypes were produced until the 1940s, though not nearly as popular as they were in the 1860s and 70s.

I've found, however, that tintypes are far less likely to be identifed than cabinet cards or cartes de visites.  It is  difficult to write on a piece of sheet iron.  Tintype backs are black and so a pencil or ink inscription wouldn't show.  Oftentimes, the tintype was presented in a paper folder, and identifying information could be written on it.  But these folders ripped fairly easily and were often separated from the tintype.  The other disadvantage to tintypes is that the photographer (and therefore, a location) is usually absent.

In both of the following tintypes, the paper folders have been preserved.  Only one is identified. 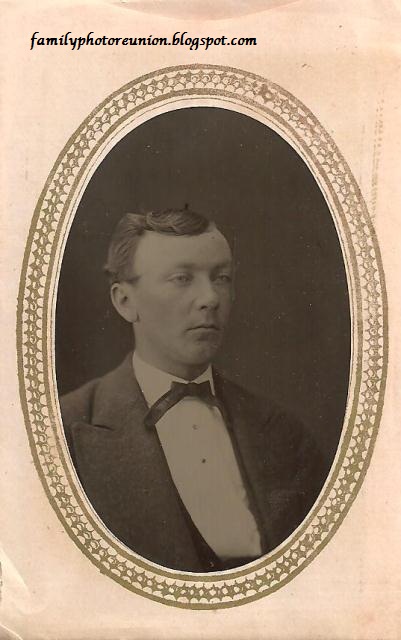 This tintype of George McCall was taken April 14th, 1873, according to the inscription on the back of the pink paper folder.  No location is provided.  Notice the subtle pink tinting of his cheeks?

I believe the second image is somewhat older.  It isn't identified in any way.  Someone has printed "tinted 1860 ferro-tintype" on the back.  (Probably the antiquarian bookshop owner where I purchased the photograph.)  I don't know if I agree that it was taken in the 1860s.  The dress doesn't seem to be full enough, when I think of the hoop skirts of the US Civil War.   The woman's hairstyle could be late 1860s.  If I had to guess, I would say the photo was probably taken sometime around 1868-1873.  I'm not an expert on hairstyles and fashions of the Victorian era, so if you can provide any insights into the time frame this photo was taken, I'd enjoy hearing from you. 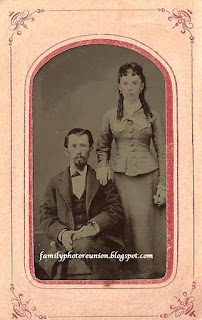 Posted by TheArchivist at 9:00 AM

Email ThisBlogThis!Share to TwitterShare to FacebookShare to Pinterest
Labels: McCall