"Oh, this one will be easy," I said to myself when I found it at an antique shop in Coombs, BC a year ago.  All three siblings were identified.  Their hometown was provided.  The photographer's imprint also indicated that the photo was taken in the sibling's hometown.  Easy-peasy, I thought.

I have yet to find a relative of these Medford siblings. 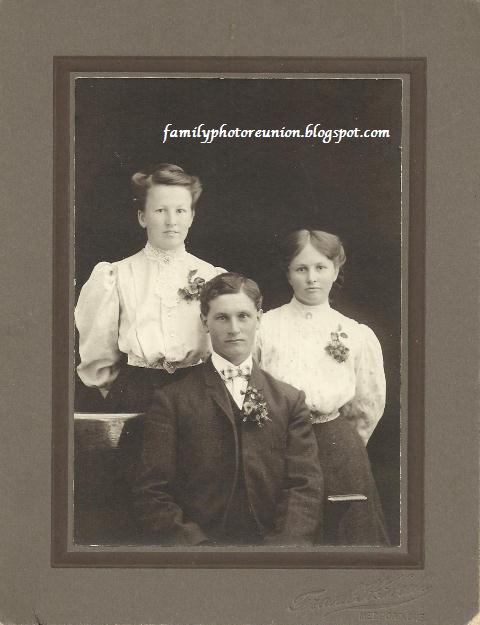 Marked on the back of the photo, "John, Jennie and Julie Dodge of Medford.  Cousins."  The photographer was Frank H. Hull, View artist, Medford, Oregon.  This photo was probably taken around 1905.

In the 1910 census, John and Jennie are still living in the home of their parents.  Julia is not there.

I thought I would go back and see if there were any other children belonging to Warren and Delia Dodge.  There are two older Dodge children listed in the 1880 US census for Monticello, Jones County, Iowa:  Lillian, b. 1873, and Arthur, born 1875.

Julie appears in the 1920 census with her parents, Warren & Delia, but she is now married.  She and her new husband, Eugene Dow, 40, live under her parent's roof.

Jennie Dodge married Ransom Dopp in 1914.  I found an obituary for Ransom in the North Pacific Union Gleaner, April 27, 1953, V. 48, No.17.  Here is an excerpt.  I've left out the list of surviving family members for privacy reasons because some may be living today.

The 1930 US Federal Census for Medford, Jackson, Oregon shows John Dodge is now married to Mary Dodge, and has two children, ages 6 & 8.  His occupation is listed as a deep well driller.

John Dodge's WWII draft registration card shows he is still living in Medford, Oregon at age 63 in 1942.  We learn that his middle name is Mark.

If you have any of these Dodge's in your tree, feel free to contact me.


Posted by TheArchivist at 9:00 AM