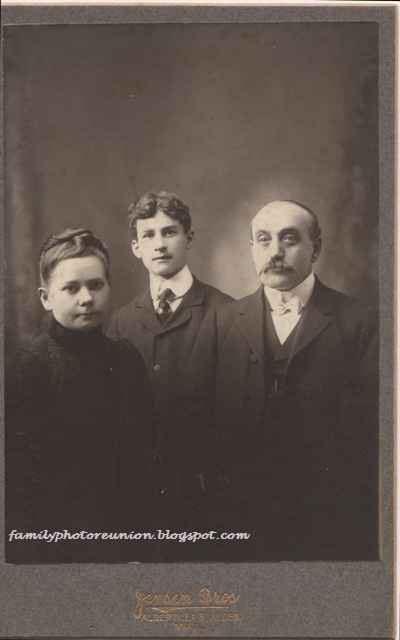 I definitely have a soft spot for items with a Denmark connection because of my own Danish roots.  I have many Jensens in my family tree, but I don't believe that this photograph, marked "L.P. Jensen, RR3, Albert Lea, Minn." is tied to my family.  Jensen in Denmark is like the Smith surname here in North America.

To narrow down the date of the photo, I researched "Jensen Bros." in Albert Lea.  According to the Minnesota Historical Society's Directory of Minnesota Photographers website, they were in business in Albert Lea roughly from 1896 to 1912.  However, their Alden, Minn. studio operated for a only a few short years between 1898 and 1900 so we can conclude that the photograph was taken during those years.

From my Danish research experience, I suspect that L.P. stands for "Lars Peder (Peter)."  It could, of course, be any combination of names.  A quick Ancestry.com 1900 census search, with Albert Lea, Freeborn, MN as the location,  produced only two L.P. Jensens, one L.P and the other Lars Peter.  I discovered in subsequent censuses that L.P. is also a Lars Peter Jensen.

In the 1920 US Census, the Lars P. Jensen of family #1 is now a widower, and son Christian M. Jensen (mistakenly identified as "wife") is living with his father.  Christian M. Jensen appears as Lars P. and Christine's son in the 1895 Minnesota State Census, and the 1910 US Federal Census, in Albert Lea.

It's difficult to say for certain if either family is a match, but I'm leaning towards Family #1 as a better possibility. The young man in the picture could be Holger.  L.P. owns a farm, and the inscription on the back of the photograph indicated a rural route.  However, the woman in the photograph doesn't seem old enough to be Christine, age 51.

What are your thoughts?


Update, June 4, 2012: This photograph is on its way to Denmark to be reunited with family. It was confirmed that it is a portrait of Lars Peter and Christine Petrea Jensen and with a son, probably Holger (See Family #1 above).  The family sent me a photo, taken quite a few years earlier, from the very same studio. It's them all right!
Posted by TheArchivist at 2:30 AM