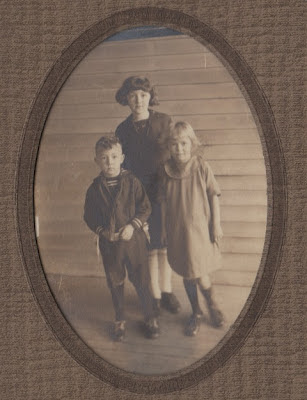 I was browsing a local antique shop when I discovered this portrait of three siblings.   "J. T. Rogers, 59 -3rd Ave. 1923.  Isabel, Evelyn & Joe" is written in pencil on the back of the photograph.  When I brought it to the till, the shop owner began to share a little history about the eldest child in the photograph.  Isabel Rogers Lewis had passed away just three years earlier in Parksville, BC.  The shop owner had known Isabel personally which helped tremendously in piecing together the history of the three children, but especially the life of Isabel.  The store had acquired quite a few pieces from the estate of Isabel Rogers that are currently for sale there.

Joseph Trivilla Rogers, Jr. became a cardiologist and moved to Arizona.  Evelyn married Joseph William Broderick in 1944, raised a family and passed away in Clearwater, Florida in 1984.   In 1930, Isabel graduated from Woodrow Wilson High School in Beckley, Raleigh County, West Virginia.  According to the antique dealer, Isabel met her husband, John Lewis (b. 1905 Nantymoel, Wales), at University in Texas, they married  and the couple went on to Berkley, California. John was just a small boy when his family came to Vancouver Island around 1911 but John left to pursue his education in the US and did not return to the Island until 1970. At the University of California at Berkeley Isabel earned her PHD in Psychology.

Isabel and John Lewis came to Vancouver Island to vacation for the next few years before eventually making the San Pariel area of Parksville their home.  The antique dealer told me that John had something to do with the early years of the Nanaimo Concert Band.  I found an interesting interview with John Lewis on the Nanaimo Community Archives website about early days in Nanaimo.  Isabel shared John's love of music and was also active in Nanaimo Concert bands and choir after moving back to the island in the 1970s.

I also found an obituary in the November 10, 1980 evening edition of the St. Petersburg Independent, Clearwater, Florida for Isabel's father, who died in Nanaimo, BC in 1980:


It would appear that Joseph T. Rogers died while visiting his daughter.

John Lewis died on December 6, 1993 in Parksville.  His obituary appeared in several local papers, including the Arrowsmith Star on the 10th of Dec., 1993.  It tells us that his father was John Lewis, Sr.

Isabel Rogers Lewis passed away peacefully in her sleep on May 4th, 2009.  Her full obituary appears in the Parksville-Qualicum News in the Monday, May 4th 2009 edition.


Posted by TheArchivist at 4:00 AM