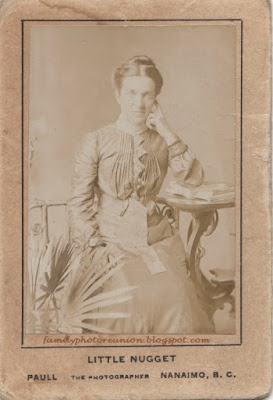 I found this unidentified photo in a dresser drawer in a shabby-chic design store in Campbell River, BC. It appealed to me because it was photographed right here on Vancouver Island around the turn of the century, and so I bought it.

Most of Vancouver Island was still pretty wild in 1900. The province's capital, Victoria, was a growing, modern city and Nanaimo, with its mining and logging industry, was a centre for employment mid-island. The New Westminster Columbian reported in their December 1903 issue that "A.A. Paull, photographer, though a native of Jersey, left the Old Country when two years old, and until 1892 lived in London, Ont., where he learned the trade of cabinet maker. His next move was to British Columbia, and he has resided there since then, doing a good business as a photographer."1

Alfred Albert Paull, son of Alfred (a baker) and Mary Paull, immigrated to Canada from St. Helier, Jersey with his parents and sister, Jane, in 18722. The Paulls settled in Ailsa Craig, Middlesex North, Ontario3. By 1891 Alfred was living on his own and working as a cabinetmaker4, but the rest of the family, including Alfred's 10 siblings, had moved across the county to live in New Westminster, B.C5. A year or two later, Alfred Albert moved to British Columbia as well.  In 1893, the reunited family lived at 912 Seymour Street in Vancouver6.

I found an entry for A. A. Paull, the photographer, in the City of Nanaimo Archives' Information File. Using various city directories, the staff at the archives traced his movements at the end of the 19th century, into the early 1900s. Paull worked for the CPR as a freight checker and deliveryman in Vancouver from 1894 to 1901. In 1901 he is listed as a photographer for the first time, having opened a studio on Fitzwilliam Street in Nanaimo, in the area now known as "The Old Quarter." I believe my photograph dates to this time period. In 1902, Paull shows up once again in the Vancouver Directory, this time as a photographer at 45 Cordova Street, and the following year at 61 Cordova6. But Paull is in business in Nanaimo until at least 1903, as several advertisements appear in the Nanaimo Daily News that year promoting his studio "opposite the Presbyterian Church."

He has a roving photographic business up and running in 1903.

It seems to have been a "pop-up" type of operation. Perhaps the Paull Studio made the rounds to small towns, opening a studio for a period of a month or so before moving on. I believe Paull may not have always made these trips himself. The Cumberland News states on October 8, 1902 that "Mr. Schinck of Paull's Studio has terminated a successful visit here and returned to Nanaimo on Friday morning." It's quite possible that other photographers, hired by Paull, helped run these studios. Schinck appears in the 1904 BC Directory as a photographer based in Nanaimo.

The A.A. Paull Studio also shows up in other BC towns, including Moyie, a small town located on the mainland in the East Kootenays.

In a November 1909 issue of the Moyie Leader, the paper announced that A.A. Paull was moving his studio to Michel.

Cranbrook appears to be another location for his photographic business. On June 5, 1911, the Cranbrook Herald wrote:  A. A. Paull of the Albert Studio, is away to Rossland on a business trip and will be absent from the city for a week or so.

In the 1920s A. A. Paull is still taking photographs. Many commercial images relating to the BC lumber and mining industries are available on the Vancouver Public Library's Special Collections website for viewing7. Alfred Albert Paull died on the 18th of June 1958 in New Westminster, BC8.

The name of the woman in the photograph is still a mystery.

Posted by TheArchivist at 7:32 PM

Email ThisBlogThis!Share to TwitterShare to FacebookShare to Pinterest
Labels: Ailsa ON, Cranbrook BC, Cumberland BC, Jersey, Nanaimo BC, New Westminster BC, Paull, Schinck