What a Shame Wednesday: Three Men, Brandon, Manitoba, circa 1880s 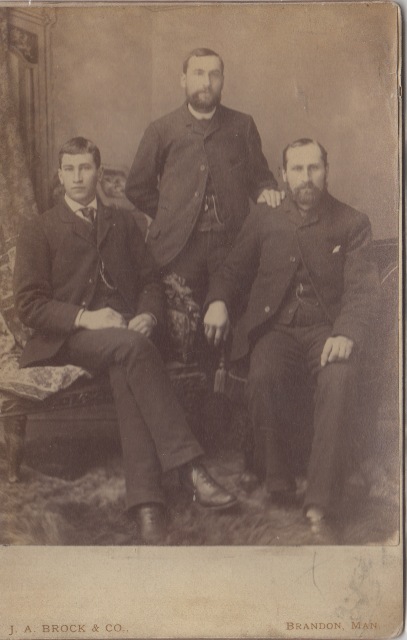 When I purchased this cabinet card photo at an Airdrie, Alberta antique shop, I was very hopeful about the chances of a successful identification.  Unfortunately,  it hasn't turned out that way.  Perhaps by posting it here, someone will be able to shed light on the identity of the photograph's subjects.  It's a tough one to date, but I'd guess somewhere around 1890.

The image was taken at the J. A. Brock & Co. Studio in Brandon, Manitoba.  The words "W. Mc Gee, Arcola" are scribbled on the back of the card.

First, the photographer:  after a little research, I've come to learn that John A. Brock formed a business partnership with Harry Torkington Devine around 1884.  The studio was located on Rosser Avenue in Brandon.  The pair moved J.A. Brock & Company to Vancouver in 1886, but later that same year, Brock moved back to Brandon to continue the operation there, and Devine remained in Vancouver.  The partnership came to an end in 1887.  In 1893, J.A. Brock & Co. has a studio on Spring Street in Los Angeles, California as well as in Brandon.

In addition to being recognized as Brandon's first photographer, J. A. Brock is credited with lining Brandon, Manitoba's early streets with maple trees.  He would hire local boys to collect maple seeds from along the river for $1.50 a day.  Many of the trees are still standing today.

I came up empty on the three men in the photograph.    I looked at the Canada censuses, and while there are quite a few McGees in Saskatchewan, I don't see any that look like a match.  The local history book for Arcola, Saskatchewan might have information about W. McGee, but unfortunately,I haven't been able to track down a copy of Arcola-Kisbey Golden Heritage Mountain Hills to Prairie Flats on loan.

What makes this really a shame, is the fact that I don't know if W. McGee is one of the individuals in the photograph, or the recipient of the photograph.  Sometimes I just proceed with the search, even though there isn't much to go on.  Sometimes I get lucky.  In this case, the search didn't yield good results.

If you know anything about the people in this picture, I'd love to hear from you.
Posted by TheArchivist at 4:00 AM